The SCIENCE INSPIRED project was created to show that science centers are great places to go on a journey of knowledge and science and that teachers and popularizers can be an exceptional inspiration for young people to acquire knowledge and skills.

SCIENCE INSPIRED project was created to showcase that science centres are a great space to start your own scientific journey, and teachers in collaboration with educators can be an exceptional inspiration for youth to try to actively acquire their knowledge.

During the project 4 science centres are joining their forces. Those are: Experyment Science Centre in Gdynia, Poland, Agóra Science Centre in Debrecen, Hungary, VIDA! Science Centre in Brno, Czech Republic and NOESIS Science Centre and Technology Museum in Thessaloniki, Greece. Project was set up to inspire both teachers and educators as well as teenagers to pursue their own scientific passion.

Research shows that students find science classes to be interesting and promising, even though they seem to be the hardest and the most demanding. Teens lack in resources, that would allow them to acquire the knowledge easier. To help them, during Science Inspired project, new tools will be introduced to teachers and educators, in order to encourage young people to take up new challenges.

Aims of the project:

During the project teachers and educators will:

As a part of the international Science Inspired project we travelled to the Polish city of Gdynia. The hosting science centre Experyment prepared three days of a wonderful and rich programme. Together with colleagues from Greece and Hungary we first got to know the Science centre itself with all exhibits and activities offered to visitors. We participated in sessions in pervasive game development and dramaturgy of games. We experienced and then created innovative scavenger hunt games with using the Action Track tool. We undertook an experimental workshop on electricity about Edison and Tesla. In teams we conceived, shot and edited an educational video, in which a specific natural phenomenon was introduced in a attractive and educational way. Lectures on how to create such videos with useful tips, tricks and tools helped us very much in this task. We also didn’t miss out on an escape game in which we followed a spy through Europe and also created a teenager persona to help us understand this specific age group.

The first study visit took part in Polish Gdynia in the Experyment science centre from the 1st to 5th April 2019. Together 20 representatives of science centers and 20 teachers from Poland, Hungary, Czechia and Greece took part.

Program of the study visit in Experyment can be seen → here.

The second study visit of the Science Inspired project took place from 6th to 10th May at our own VIDA! science centre. After our first visit to Experyment, we now had three days to show the best of what we have to offer. We hosted 15 science centre educators and 15 teachers from Poland, Hungary and Greece. Our team was composed of 15 people - 7 teachers and 8 staff.

At the beginning participants got to try the exhibit game Smarter then Holmes. During the visit they got to see two science shows - Detonator and Mr. Ear. They found out how Vidators are prepared during a performance workshop and games workshop. And if that was not enough they could visit us at night during the VIDA! After Dark event built around the theme of Love.

Besides common activities each participant could choose which programs they want to experience - Under the skin or VIDA! escape game and Open heart or Plasma.

In VIDA! escape game it was necessary to solve a series of puzzles and tasks to escape a mysterious room. Under the skin gave us knowledge about the hidden reproductive system of the human body. In Open heart everyone could find out about the anatomy of our heart and Plasma gave us a look into the fourth state of matter.

The last day was aimed at connecting schools and science centres - half of the participants got to visit an exemplary lesson at Sirotkova Elementary School, where they got to see how experiences from a visit to VIDA! are applied within the education process. The other half went to a Science bazaar in VIDA! prepared by high school students for their younger peers within the VIDA! to schools project.

A non-traditional tour of the historical city centre of Brno was the urban puzzle game Cryptomania: Battle of Brno which took us through places where brave Brno citizens withstood the overwhelming numbers of the Swedish army during the thirty years war.

The whole study visit was interlaced by creating science popularization videos, which were screened during the final Thursday dinner.

Program with annotation is → here.
Photo gallery can be found → here.

Our third study visit from the Science Inspired project took us to the Agora science centre in Debrecen Hungary from sunny June 24th to 28th.

Agora is located in the botanical garden of the Debrecen university, has an architecturally interesting interior with a large auditorium, interactive space with exhibits, aquarium, virtual reality zone, an inflatable planetarium, workshops and laboratories and an observation cupola on the roof.

The introduction and tour took us through all main spaces and also into facilities not accessible to the public such as exhibits workshop, work-in-progress space and a monochromatic room where colours disappear.

Edutainer from Agora also prepared an optional program - one half went to visit Károl Kós High school of Arts and the other got to test a brand new adventure game taking place in the exhibit where small teams searched for a stolen painting. By solving puzzles and ciphers we were eventually able to find the stolen art-piece.

We got to try out a workshop on recycling and renewable energy and robot construction workshop where we learned how to program a Lego mindstorms robot in a graphical programming interface and then had the robots play a sumo wrestling championship. Even those without previous experiences in programming were quickly consumed by the playfulness and after loosing all doubts had a lot of fun. We learned about online tools and platforms such as Quizizz, Quizlet and Kahoot!. Since this was the third study visit, we got to use all previous experiences in creating science videos and again confirmed that to create a high quality short video a day's work is not enough.

It was inspiring, full of sharing experiences between participants and immensely enriching.

Program of the study visit is → here.

Our last study visit of the Science Inspired project was to the NOESIS science center and Technology museum in Thessaloniki.

NOESIS differs from other science centres in its area. Thanks to the 4D cinema, planetarium, IMAX cinema, interactive exhibit Technopark, old cars exhibit and ancient Greek technologies exhibits, library and temporary exhibition zone, there is enough to see for any visitor.

We didn't have to choose from different programs and got to experience everything that was prepared for us.

During the Games from scratch workshop we made our own card games starting with well known ones and redesigning them with a scientific touch and then testing them by play. In the Tinkering workshop we experimented with simple electric circuits and built our own robot that could draw.

During the Drones workshop we first got to fly and program small drones inside a room and then got to test a much bigger one with a camera and flew it over NOESIS.

We got to play a Decode the code game which aims at motivating teenagers to learn programming and logical thinking while working in a team a using each others strengths. The science show was about fun kitchen science experiments.

As tradition has it we got to play an exhibition game designed by university students and created popularization videos with exhibits during the last day.

As this was the last study visit and everyone got to know most of the other people, the atmosphere was quite relaxed and so the exchange of ideas and opinions was free and spontaneous.

Thanks to all from NOESIS for preparing such a wonderful and inspiring visit.

Program of the study visit is → here. 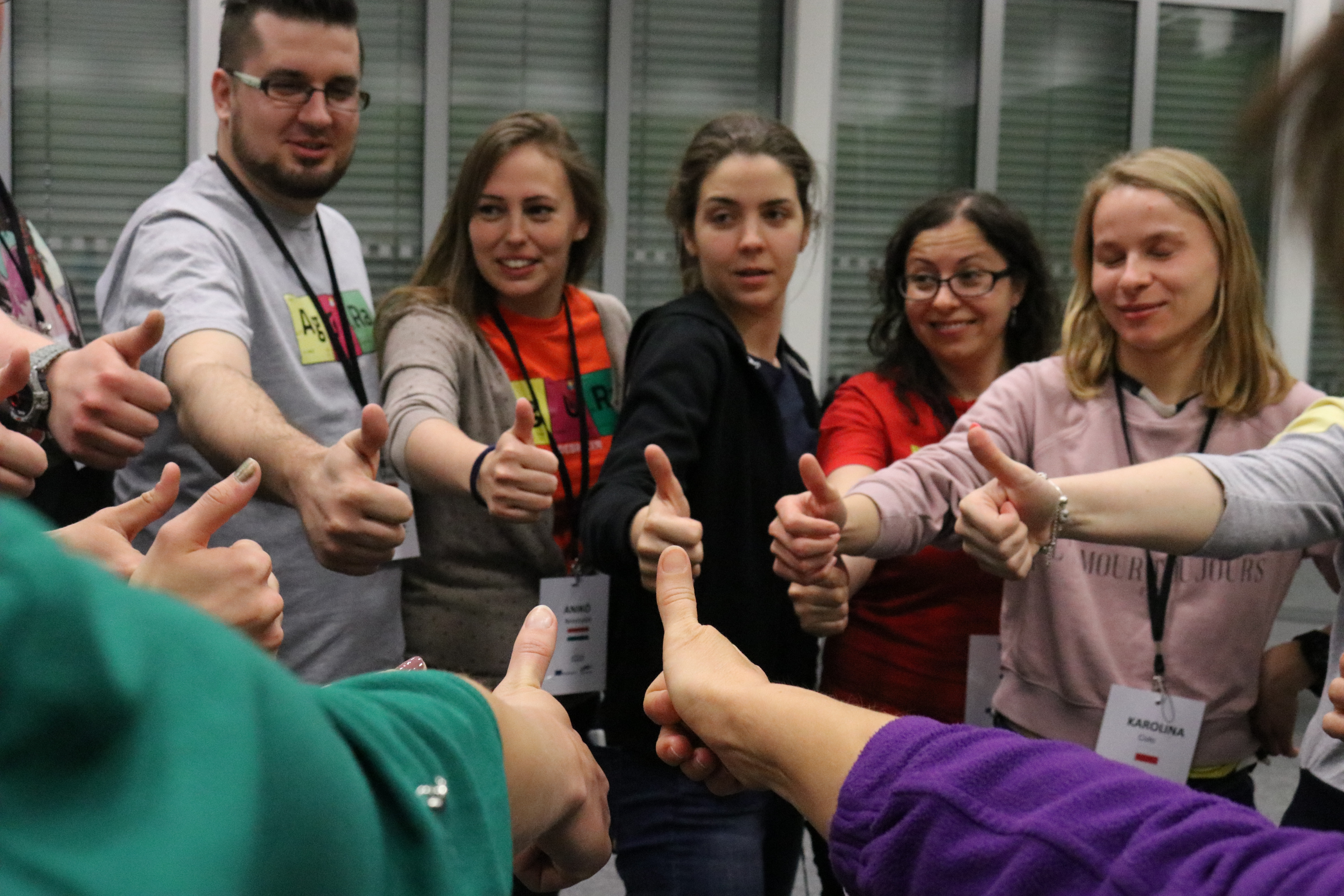